In the Permanent Collection of the Yukon Territorial Government

For me, a place exists not only visually and in terms of touch, but also in a realm that defies words and pictures.

My desire is to convey more than just a visual record of these regions where I have walked and explored and even flown over. I want to relate my feeling and sense of place; the feeling of being out there on the land. Many of the paintings in this series are painted from an above ground perspective and there may be a slight feeling of vertigo that comes with viewing these loosely formed images. Pierce the Sky shows a swirl of mountain peaks just visible above a spiral of thin cloud. The mountains and clouds are both painted in a spiral swirl that echoes our own internal structure - that basic pattern of life ... DNA ... a patterning that encompasses both the macro and the micro.

Pierce the Sky was sold to The Permanent Art Collection of the Yukon Territorial Government in 1997. 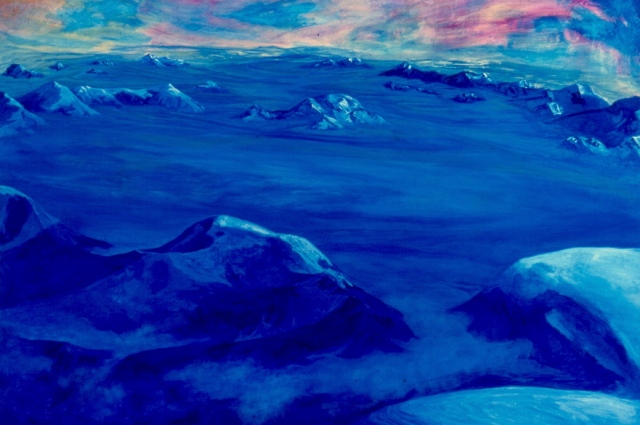